Screen printing is a printing technique that uses a woven mesh to support an ink-blocking stencil to receive a desired image. The attached stencil forms open areas of mesh that transfer ink or other printable materials which can be pressed through the mesh as a sharp-edged image onto a substrate. A fill blade or squeegee is moved across the screen stencil, forcing or pumping ink into the mesh openings for transfer by capillary action during the squeegee stroke. Basically, it is the process of using a stencil to apply ink onto a substrate, whether it be t-shirts, posters, stickers, vinyl, wood, or other material.

Screen printing is also a stencil method of print making in which a design is imposed on a screen of polyester or other fine mesh, with blank areas coated with an impermeable substance. Ink is forced into the mesh openings by the fill blade or squeegee and onto the printing surface during the squeegee stroke. It is also known as silkscreen, serigraphy, and serigraph printing. One colour is printed at a time, so several screens can be used to produce a multicoloured image or design.

Screen printing is a form of stencilling that first appeared in a recognisable form in China during the Song Dynasty (960–1279 AD).[1][2] It was then adapted by other Asian countries like Japan, and was furthered by creating newer methods. The most useful advancement was also developed in japan recently and culminated in the introduction of the GOCCOPRO.

GOCCOPRO:- all the artistry of the original process with all the ease of a modern day digital system.

WE ASK THE QUESTION WHY SCREEN PRINT?

Screen printing is a desired method of printing. No sitting on a garment, no heavy vinyl.
When your customer leaves with their product they shouldn't be thinking 'It will last for bit' they should thinking 'wow I'm going to use these guys again'. Take a look in your cupboard now and I guarantee at least one of your favorite shirts is screen printed. That soft style effect that lives with the fabric not on it.

For decades this could only be achieved with the help of large industrial sized screen printers. This made the look lucrative, almost exclusive. Large accomplished brands were the controllers of screen printed garments. No longer. The small start up, straight of design school or the budding designer with an eye for new trends. All now have the ability to incorporate into their style.

Now with the ability to operate an effective screen print operation from just a table, you too can harness 'the screen print look'. Find out how by giving us a call or traipsing our website. Better yet come and have a shot, bring yourself and design to our Edinburgh manufacturing centre and we will hire you all our facilities for a day or even a week. This can be your opportunity to start something amazing and with the help of GOCCOPRO you can start it today.

Today we were working with our new inks. They are water based and have fantastic coverage. The great thing about these inks is how easily they can be cleaned up and then colour changed.

Our experiment today was to take a detailed leavers hoodie design and then wash out the screen and change the colour. You will see below various colours and the GOCCOPRO screen is still going strong. I am not sure how many times we changed the colour of t-shirt and ink as we tried out different combinations.

The simple system works so well and the GOCCOPRO really is revolutionising the screen printing industry! 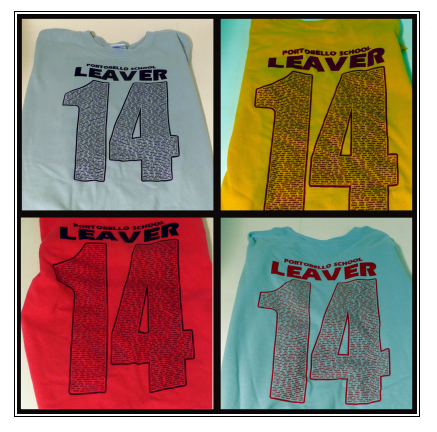 THE RISE OF THE NEW GOCCO. SREENPRINT TILL YOU DROP

HISTORY - Print Gocco is a Japanese colour screen printing system developed in 1977 by Noboru Hayama. Resembling a toy, the compact and self-contained printer is clean, quick and easy to use. At one time, nearly 1/3 of all Japanese households owned a Gocco. In the ’90’s, Print Gocco slowly started to develop a following in the indie-craft movement, gaining notoriety as a cost-effective and efficient method of printing multiples. In 2005 Riso (the parent company of Print Gocco) decided that it was no longer viable to produce the Gocco for many different reasons. A sad day.

MODERN HISTORY - In December of 2008, Riso shipped their last stock of supplies to loyal vendors and closed its doors on Gocco. In early 2011 Riso Released the GOCCOPRO a new screen printing system that takes the GOCCO personality adding a modern twist and like the phoenix rising from the fire the GOCCO lives on.

TODAY - Now in 2013 Riso have introduced a modern version of the GOCCO and in a modern age we again can play with the very unique fun handmade printing system that beautifully merges old and new.

FACT - Today we love the digital age we are living I can tell this because Apple has sold 89 million iphones alone. A staggering number.

FACT - In every city and town in the UK there are small craft fairs every weekend with thousands and thousands of creative people producing and selling their own hand made products. Labels and products need printing and what better way than screen printing.

GOCCOPRO if you have not tried it you really should

check out our web page to see the future of screen print CLICK HERE
Posted by GOCCOPRO UK at 13:52 No comments: